I was sent a link to The School For Health and Care Radicals ( #SHCR ) a couple of weeks ago. Cool title I thought, so I took the typical 7 and a half seconds to look. It is a free online training initiative from somewhere in the NHS in the UK.

Then I saw it…. “How to rock the boat, without falling out”.  It spoke to all my past frustrations where good ideas that I was initially fired up about, and keen to contribute to,  came up against the inertia of the system, and inevitably after a variably long and exhausting process, fizzled, and I took my bat and ball and left.

This school though, offers new hope and new ideas, with a distillation of what works. A novel idea, I know, to look at how great ideas actually became great actions, and see if, by replicating the “how”, we could be more successful in bringing innovative endeavours to life.

So Here’s what Ive learned so far:

The old pilot project is on the way out. They take too long and cost too much. Waiting 18months to find out your idea didn’t work wastes time, resources and energy. Change projects are now brief experiments. They are 30, 60 or 90 day projects or prototypes and require minimal infrastructure yet deliver useful information. Quite like the wave of pop-up restaurants, shops etc. they provide a similar efficient use of resources and you get immediate feedback.

The next biggest thing I discovered is that change begins on the edges, but mobilises through networks. Not just with bigger networks of the same people, but with bridging to other networks that have the same dream. For example the project I am involved with is to provide effective interventions for young people with mental health issues who have disengaged from school. The idea is that if I try that alone I won’t get far, and if I network with other GP’s we will miss something, but by including all groups that are passionate about good outcomes for this vulnerable group, we are more likely to bring about positive and sustainable change.

The last conference you were at, did you notice that there was more expertise in the audience than on the stage? Did you know that the employees in an organisation have 10 times the social connectivity of the organisation itself, but are rarely allowed to speak the voice of the organisation? Harnessing these networks and the vast expertise brings huge momentum to change processes. 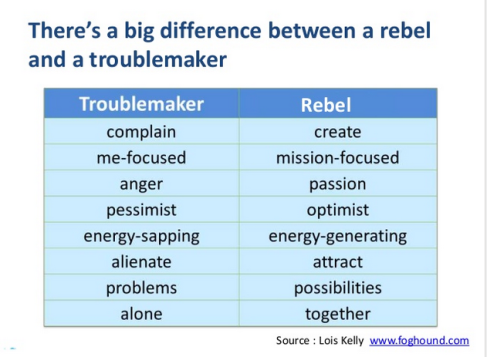 I learned that successful change embraces the trouble makers, and shifts their anger into passion. This happens by including them, and honouring their concerns, not by excluding them.